About a month ago I got bored while doing Megan's hair. What resulted were these braids: 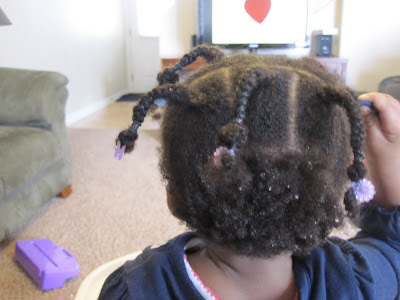 (Yes, that is the television on. I have to stick her in front of it or she won't stay in her seat. Though restrained, she still moves her head around and tries to bat away my hands sometimes. Maybe I'm bad for using the tube, but YOU try keeping a one-year-old still for an hour!)
I was actually really proud of the braids. I thought I was being creative or something. Even though it was only a mere 5 braids it still looked super-cute, and it only took about 40 minutes to do. 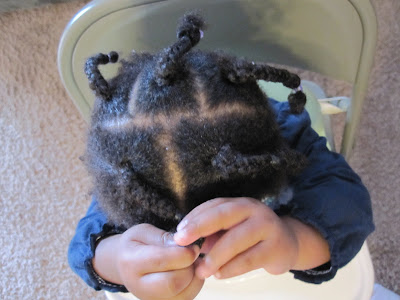 Then, a couple weeks ago, I got bored again. This time it resulted in more box braids. I had to do it in two sessions, with one hour for each session. On Friday I combed out her hair and put it in 15 "puffs" on her head. Then, on Saturday, I combed and then braided the puffs. The braiding was really tedious, but I must admit that it turned out totally cute. I'm hoping it will stay in for a total of 3 weeks, but we'll see how ratty it gets. Here are the 15 box braids: 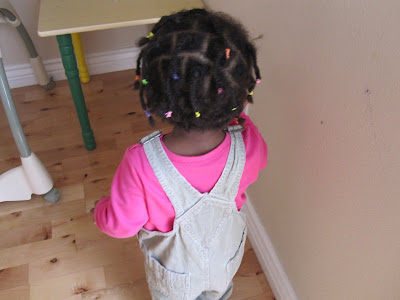 15 isn't really very many, but her head is small and it's all I could manage to do.
Sometimes she will sleep in a funny way and she'll wake up with some of the braids poking straight off the top of her head, which is pretty comical (but I didn't think to take a picture of it). 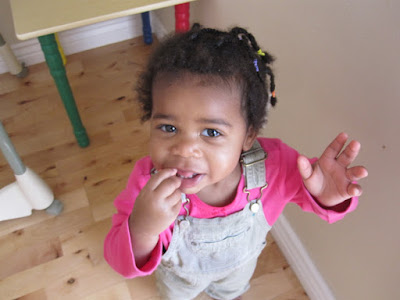 I can't wait until I can try cornrows, but her hair is definitely too short for that right now. Plus, I have the suspicion it will take significantly longer than 2 hours.
Ironicaly, despite all the work that goes into some of Megan's hairstyles, I seem to get the most compliments on her hair when it is just in a fro with a headband. 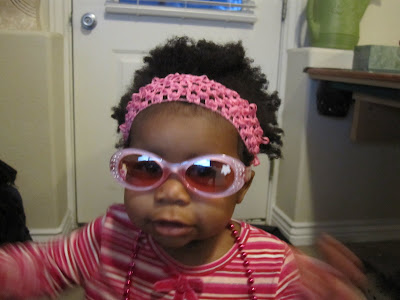 Love love the braids!! But she is super cute no matter what her hair is doing.
p.s. You are a saint for watching Spencer for us. Sorry he cried so much :( Hope you didn't want to kick him out the window.

Just go with thah fro! ;) I loved her many box braids! Wow, I can't imagine doing her hair for 45 minutes. I don't even spend that much time in the bathroom when I shower!

She's a doll no matter what!

So cute, I stick Carly in front of the TV on my lap too - although now she is finding out that nickjr.com is her best friend. She will play the games and sit so nicely for me, it's totally worth it. Try twists! It's must faster than braids and so cute and they stay very nicely. Split the hair into 2 bunches, twist each bunch the same direction, then the opposite direction together. (hope that made sense). It's also easier to take out. And on small twists you can add beads. (If you're totally confused, let me know on facebook or email and I'll do some kind of education video lol) I have yet to master corn rows, its so much different braiding her hair as opposed to mine, but I try from time to time.

So adorable! Stick with the braids, they look so cute. When you're ready for cornrows I'm willing to help! They take a long time to do, but they're adorable. Also, I can teach you braid extensions when Megan is old enough to want them. They take all day but it's so cute to have the LONG braids.

Also, black hair is really fragile, so be careful with headbands. I've known a few black ladies that wore headbands too much and damaged the hair under the headband so bad that it won't grow back now. Just be careful not to use them too often. You don't want her having a receding hairline!

Love, love, love it!!! She is seriously too adorable!

Love your blog Harmony, and the fact that you spend that much time on Megan's hair! What a good mommy.