A couple things I'm thankful for

I know it's a little late, but here are two very important and wonderful people I am thankful for. 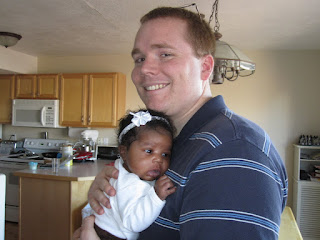 Oh, and I just have to throw in this picture of Megan and her Thanksgiving outfit. Isn't she a doll? 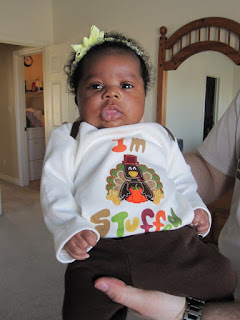 I dedicate this post to Waldo. I spent many an hour in my youth trying to find him amid colorful arrays of pages. For some reason, the Beach page comes to mind. I seem to remember a fat lady in a bikini on that page. Interesting.

Anyway, I challenge you to look in the picture below and see if you can find tiny Megan amid the sea of bed she is in: 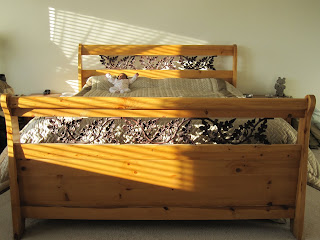 Did you find her? (she's on the left side).
I do have a story to go along with this picture. You see, I was folding laundry in my room (as a good little wifey does) and I had Megan propped up on the pillow. She was just chillin' like a villian. I ran downstairs for a micro-second, and when I came back, her hands were above her head and she was sound asleep. It's a very common pose: hands above head. I guess it was just funnier because her hands really were above her head, as in higher elevation. Maybe I don't tell it well, but it was pretty darn cute. I laughed out loud when I saw it. She's just so stinkin' adorable!! 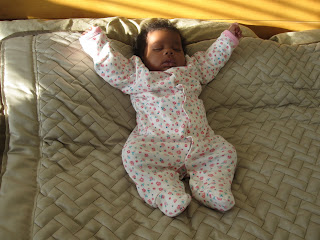 Before today, all of my attempts to go to the Post Office have been rather uneventful. In fact, I am quite fond of the Springville Post Office. They 've got an itsy-bitsy spot in my heart. Today's visit was quite eventful, but not because of the Post Office.
You see, I had to send packages out to 3 of my sisters, and I didn't have any good boxes to wrap up the merchandise in. So, as I've done before, I planned on bringing the stuff and packaging it up at the Post Office. Normally this would not have been a problem. Now bring in Baby Megan. And flustered Mommy. That's the formula for disaster. Sigh.
I had 3 big plastic bags full of stuff I was sending to my sisters, and there was no way I could carry all of those plus Megan in her carseat into the Post Office. Wasn't gonna happen. But, I'm a smart cookie and planned ahead to bring my stroller so I could put the carseat into the stroller and free my hands. Fast-forward to today's incident.
Imagine me driving up to the Post Office (vrooom, vroom), lugging out the stroller from the trunk (ugh, ugh), setting it up (whoooup), getting Megan's carseat out of the car (whee, whee),putting the carseat into the stroller (click snap), holding all these plastic sacs and the diaper bag and strolling into the Post Office (huff huff, puff puff).
.
I felt kind of dumb, because, who brings a stoller into the Post Office? Well, I figured maybe people would assume I took a walk to get there. (Not that I really care what people think.) Then I proceeded to package up all the stuff, which probably took me 20 minutes because I couldn't find the right sizes and didn't know what would be cheapest. Finally, I get up to the counter, the lady tells me how much it's going to cost and I reach into my diaper bag.... NO WALLET! I just about died. After all that work to plan ahead, and I didn't even have my wallet!
I had to bring the lady back exact change, so I went back out to the car (huff huff, puff puff), put away the stroller (ugh ugh), put away the baby (whee whee), and drove home (vroom vroom) to get my wallet. Then, I had to drive to the Bank. I had to get Megan out of the car to make a withdrawl inside, then get her back in the car. Then I drove back to the Post Office, got Megan out, waddled inside, and handed the lady an envelope with $38.92 cash.
And, I still had to go to Wal-mart before Megan would wake up. (side note: while at Wal-mart, I left my wallet at the check-out line. Luckily some nice girl ran it out to me. Sheesh!)

What did I learn from all this?
1) it takes 600 times longer to do anything when you're carting around a baby
2) go to the Post Office when dad can watch the baby- just like he suggested.
Posted by Harmony at 4:41 PM 7 comments:

Her sense of humor

Megan thinks she's SOOO funny. Obviously, she has demised a crazy plan in that little head to keep us on our toes. While she's sleeping, she plans things she's going to do to entertain herself when she's awake (which, besides the dirty-diaper-making, includes making her parents do whatever she wants them to do). Then, once she falls back asleep, she smirks, remembering how she's got her parents wrapped around her finger.

She thinks it's really hilarious to keep me at the changing table for 15 minutes, pooping through each new diaper I've put on her. I keep asking her, "are you done?" and I wait 5 more minutes. Then, as soon as I change the diaper, she poops and smiles some more.
Megan thinks it's funny to not let me get anything done. It's not that she's cranky or demands my attention; it's just that she has such cute facial expressions and is so darn adorable, that I have to play with her all day. She obviosly plans that one in her sleep, too.
Lastly, she thinks it's comical to play mind games with her momma. You see, when dad comes home every day, Megan is wide-awake for him. Time to play! But, the moment she's passed back to mom, she thinks she's hungry and needs to go to sleep. Apparently she wants me to think dad's the fun one. (well, actually, he is. That's what dads are for!)
But, the joke is on Megan! Ha! She has no idea how many hundreds of embarrasing pictures we have taken of her. 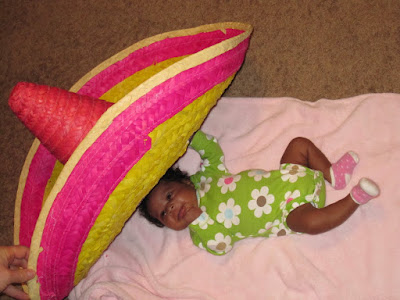 Two can play at this game, baby!

Posted by Harmony at 2:56 PM No comments:

Sometimes I wish I were one of those crazy Halloween people. I wish I were one of those folks who gets totally decked out and spends 100 smackers on a Halloween costume. I think it would be fun to go to the ward Halloween party dressed to the nines, or even have my own party. But, alas, I am not that kind of person. Instead, I try to get away with the least amount of dress-up possible. I also didn't decorate my house at all this year (but I'll blame that one on Megan).

We did, however, dress up our little play doll for Halloween. I didn't anticipate it being so much fun! She was so hilarious... just letting us change her into a ridiculous costume and take a bunch of pictures of her. She had no idea how much we were laughing. She was just so darn cute! I'm glad she doesn't realize all the things we make her do just to get a laugh. Maybe she'll hate us some day.
This costume really isn't that "ridiculous", as I mentioned above, but since it was on Megan (and 6 months too big for her) it was really funny! Here are a couple photos of our little pea pod: 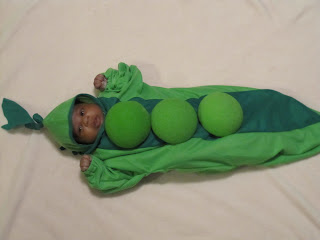 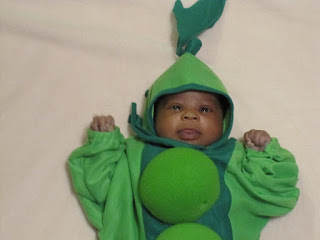 And, here's one more with mommy. You can see the extent of my costume: a sombrero & glasses. Grand total: $15. Yeah, buddy. 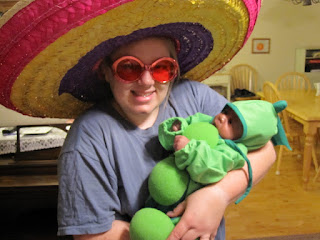 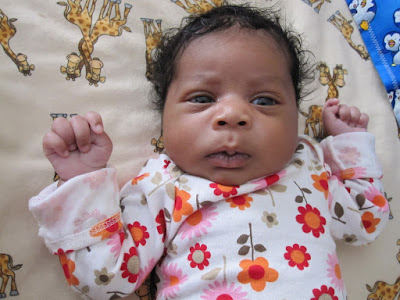 It was mid-afternoon and Megan was quite alert. She was lying on the couch staring at.. the couch. I laid my head down in front of hers and just looked at her. She looked at me. We stared at each other for probably 15 minutes. I told her how much mommy & daddy love her, and how long we waited for her, and that she is the most beautiful baby in the world. She just listened. (I'd like to think she smiled, but I think it was just gas).

Anyway, it was really sweet. Just like our girl.
Posted by Harmony at 12:44 PM 6 comments: