In a previous post, called Ode to Lacey's Song Skills, I showed the world my sister's lack of nursery rhyme skills. Granted, it's been probably 17 years since anyone has read them to her, and she only had one younger sibling with whom to repeat them. Maybe that can be her excuse. She's just hilarious. 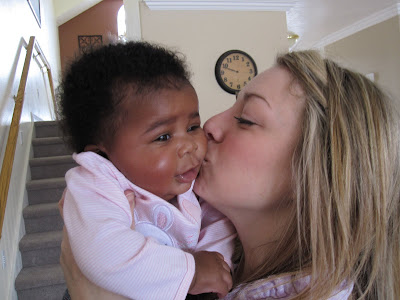 This weekend she was over, sitting on the coffee table, repeating more nursery rhymes (again, this will be more fun for you to read if you sing along):

"This old man, he played one, he played knick-knack on my thumb. With a knick-knack, paddy whack, give a dog a bone. This old dog came rolling home."
(Me): Wait, Lacey. It's This old man...
Oh, okay. So, "this old man went rolling"... no, "this old man ran rolling", no... what?
(Me): This old man came rolling home....
Right. "This old man, he played five, he played knick-knack on my spine."
(Me): Lacey!! It's "He played five, he played on my hive! You crazy girl!"
Then I asked her to sing more for me (for the purposes of this post, of course). Here were some of her other recollections:
1. Old Mother Hubbard went to the cupboard looking for curds and whey.
2. Little Miss Muffin sat on a tuffin... oh, wait. Dang. How does that go?
3. (Take 1) Hey diddle diddle, the cat and the fiddle, the frog and the spoon.
4. (Take 2) Hey diddle diddle, the cat and the fiddle, the cow jumped over the moon. When he got there the cupoard was bare.
The only one she got right was, of course, not a real nursery rhyme. It was the "Cat's in the Cradle" song:
And the cat's in the cradle and the silver spoon.
Little boy blue and the man on the moon.
When you coming home dad? I don't know when.
But we'll get together then.
You know we'll have a good time then.
Yes, Lacey, We'll have a good time then. That is, when you finally learn your nursery rhymes. Though, I must admit, the hilarious-ness of your lack of nursery rhyme-ness makes for some really silly blog-ness.
Posted by Harmony at 3:44 PM