Around 8 1/2 years ago, my husband Jared returned from a church mission to Ecuador. While there, his taste buds grew accustomed to new foods which he loved. Since then, we have tried to find restaurants which serve Ecuadorian food.
We have lived in Utah for all 7 years (this month) of marriage. Unfortuantely, we have no knowledge of any Ecuadorian restaurants in the state. Back in 2004 we went to New York City. We were sure that, of all the cities in the United States, there would surely be an Ecuadorian restaurant there. We were were shocked when we found nothing.
Finally, a couple weeks ago, we decided to take the problem on ourselves. Jared found a recipe online, the key ingredient at a nearby ethnic food store, and we went to work. We had fun cooking together, and even more fun enjoying the grub.
Here is the finished dish: Arroz con Menestra de lentejas y carne asada. The lentils (menestra) have yummy ingredients like red onion, bell pepper, tomatoes, garlic cloves, cumin, achiote (the special ingredient), and cilantro. The rice was cooked with onions & garlic. 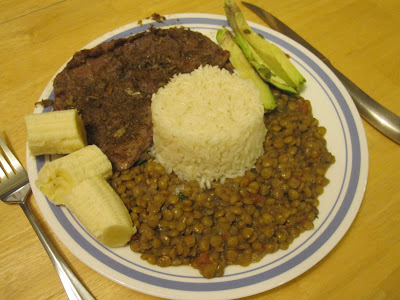 Was it good? You be the judge. 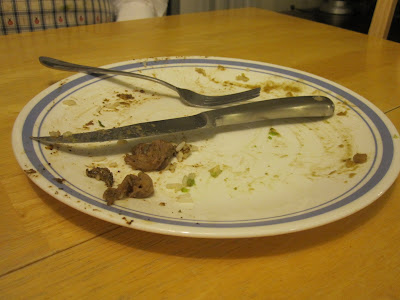 That makes me want to go eat some food from my mission...oh yummy!

Yum! Good for you for trying it out! I'm with Jessee - send me the recipe when you find the right one (and some of that secret ingredient - absolutely sure I won't find it here!).

Happy anniversary month! And birthday month! That meal looked fabulous! How did Megan do with it?