So, I could not decide what I wanted to eat for my birthday dinner. One of my favorite restaurants in the whole world is this place called Bombay House. Mmmmmm. The Indian food there makes me so happy. However, when weighing my decision of where to go out for my birthday, I decided against going to Bombay House. The reason? I can make it myself (kinda).

I decided to make this scrum-diddly-umptious dish the night before my birthday (Wednesday). I have made Chicken Tikka Masala a few times before. Each time, I have had to tweak the recipe. I still don't have it perfect, but it's pretty dang good. 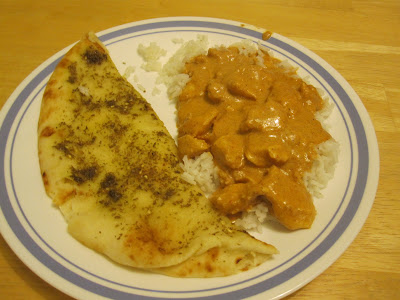 Here's my recipe, in case you're drooling after looking at that picture.

Directions
1. Marinade: In a large bowl, combine yogurt, lemon juice, cumin, cinnamon, cayenne, black pepper, ginger, and salt. Stir in chicken, cover, and refrigerate for at least 1 hour.
2. Preheat a grill for high heat.
3. Lightly oil the grill grate. Thread chicken onto skewers, and discard marinade. Grill until juices run clear, about 5 minutes on each side. (or broil on broil pan in oven... about 4-5 minutes)
4. Sauce: Melt butter in a large heavy skillet over medium heat. Saute garlic for 1 minute. Season with cumin, paprika, garam masala, and salt. Stir in tomato sauce and cream. Simmer on low heat until sauce thickens, about 20 minutes. Add grilled chicken, and simmer for 10 minutes. Transfer to a serving platter, and garnish with fresh cilantro.

1.) I used to cook this meal with Basmati Rice. However, I decided that it's too much work to do it this way. Now I just do regular white rice, and, honestly, I can't tell that much of a difference.

2.) Next time I make this I will double the sauce.

3.) This recipe is very non-spicy. If you want it spicier, you can sautee a bit of jalapeno with the garlic, or just add more paprika.

4.) In the picture, I forgot to add cilantro. The cilantro adds a lot of flavor.

5.) The naan you see in the picture is naan that I bought (from Wal-mart)! I then added olive oil and Za'-atar (which my sister brought me from her home in Bahrain) and warmed it in the oven. Holy Yummsters.

6.) I realize this is the second post in a row about food. Let's just be honest. I like food.

Best thing of all: I got to eat one of my favorite meals for a fraction of the price! Yippeeee!

Sweating in the endless heat said...

And you probably had leftovers, so you could have it more than once:-) My mouth is watering, btw;-) Happy belated birthday!

I am so jealuous that you have Zaatar! That is one of the things I miss most about living Jerusalem. It's SO yummy! :-)

Sounds like you had a very good birthday dinner!

Yum! I had some serious shivers and chills looking at that picture. Now I'm crazy hungry. :)