a Tale of Two Toddlers

Once Upon A Time, in the Roberts Kingdom, young Prince T joined the Castle de Megan. Despite her intense cuteness and sweet nature, Princess Megan became a meanie-head.

Princess Megan did not like the new prince. Prince T used her toys, ate her snacks, stole her bedroom chamber, and took the attention of her King & Queen.

The prince and princess both wanted reign in the kindgom. Both wanted the toys. Both desired the snacks. Both wanted undivided attention from the King & Queen. Consequently, chaos erupted.

This chaos forced the King & Queen to take drastic measures in the cookery.  The prince and princess could not be seated in view of each other, as this would ensue screaming and jealousy, so the young royalty was seated as evidenced below: 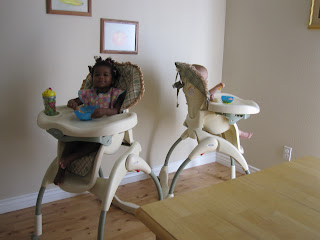 This screaming and jeaousy continued most every day, all day. There were special moments, however, when the prince and princess actually got along, as shown below. 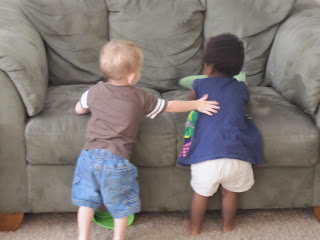 And, these were the moments the King & Queen lived for.
Posted by Harmony at 10:26 PM

LOVE the back to back high chairs! Funny hat kids make us have to do...