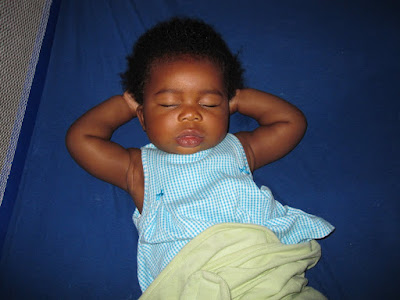 Once upon a time, in a land not-so-far-away, there lived a handsome prince. This handsome prince had a beautiful princess daughter. One night, while the prince was putting his sweet little princess to sleep, he was singing to her, her head resting upon his shoulder.
While he sang to her, he patted her little princess bottom. For a moment, he stopped patting her little bottom. In his abscence, Little Princess took her own little hand and patted her own little bottom. Handsome Prince patted again, then stopped, and Little Princess took over.

Seriously? That might be the cutest story EVER! I honestly think I would pay money to see that. You better keep a video camera handy-- it could make you rich!

That might be the cutest baby picture I've seen that is not my own kid. And the story...just magic!

how absolutely adorable. She is such a darling little princess!

What a funny kid!

that is such a cute story! and what a great picture, too! :)

That is ADORABLE. I have a feeling you will retell this story enough times as to thoroughly embarrass her at her wedding. ;o)

Bytheway, she's so freaking cute in that picture she looks fake.