A couple Thursday nights ago, I seriously thought the wind was going to blow our house down. I kid you not. I do not exaggerate. In my head, I pictured Megan's window breaking apart, and her little body being sucked out the window and thrown into who-knows-what. I had a game plan in my head of exactly what I would do if certain things happened, and even contemplated moving her into our room. When I mentioned my worries to Jared, he simply replied, "The windows are fine. If the windows couldn't withstand the wind, the window companies would be sued all the time."
Why can't I just think of that?
Thankful for a level-headed husband, I said (another) quick prayer for little Megan and went to bed. I was sure I would wake up in Kansas.
The next morning, I picked up a wheelbarrow-full of shingles off the front lawn. Keep in mind, our house is only 10 years old; shingles should NOT have been flying off. Here are just a few lying on the grass: 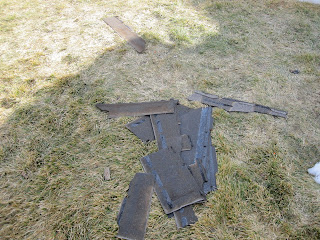 We had a couple roofers come over to do bids on our roof. One bid $150 more than the other, which I thought was interesting. Anyway, our friend Eric came by and said he used to "roof" (as in the occupation, not as in the dog-sound), and that he'd get up on our roof to help us. We decided to do the job ourselves and save a bundle of cash. 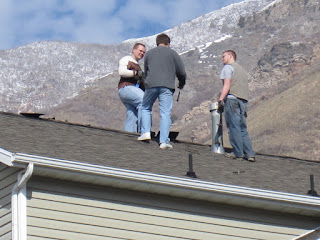 They labored for a while, and then called over 4 more guys (but I don't have a picture of that... sorry).

After several hours of getting nowhere, we decided it was better to have a professional do it. We called back our lowest bid and he came and fixed it. All by himself. Just ONE guy. (but he's been doing it for 20 years, so we didn't really feel bad).
Fixing a roof is like throwing your money in the garbage, but instead of a nasty smell, you just get some new shingles on your roof which shouldn't have had to be put on.
Uh, yeah. Sorry if this wasn't very interesting. I just wanted to remember what a pain it was.
Posted by Harmony at 9:37 PM

Labels: piece of side life

Go Jared for trying to fix it! Even if it didn't work out. Isn't that something your homeowner's insurance would cover?